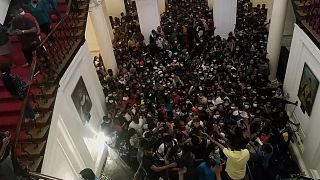 Sri Lanka was in a political vacuum for a second day Monday with opposition leaders yet to agree on who should replace its roundly rejected leaders, whose residences are occupied by protesters angry over the country's deep economic woes.

Protesters remained in President Gotabaya Rajapaksa's residence, his seaside office and the prime minister's official home, which they stormed on Saturday demanding the two leaders step down.

It marked the most dramatic day of protests during three months of a relentless crisis that has pushed many to the brink to despair amid acute shortages of fuel, food, medicine and other necessities.

The presidential palace, once a high-security fortress, now resembles a public park with thousands of people walking in and out with no security restrictions at all.

The protesters say they will not leave until the resignations of Rajapaksa and Prime Minister Ranil Wickremesinghe are official.