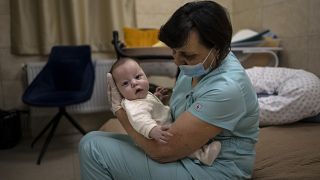 More than 20 newborns wait for surrogate parents to collect them in Ukraine capital Kyiv while under the care of nurses in a makeshift nursery.

More than 20 newborns wait for surrogate parents to collect them in Ukraine capital Kyiv while under the care of nurses in a makeshift nursery.

Some born just a few days ago, their parents are either unable to travel or not willing to risk a journey in the war-torn country.

The babies, who rely on nurses who care for them as their own, are sheltered in a basement in a location which must remain undisclosed for safety concerns, one carer told the Associated Press.

Some parents are European, others from Latin America or from China. Few have so far come to claim their child since the war started.

As the occasional sound of shelling reaches the basement, one nurse said they have become hostages of circumstance.

Some nurses came to work never to leave since the war began.

The infants need constant care and since many nurses cannot return to homes that have now become a fighting ground, they sleep and work there.

They come from towns around Kyiv such as Bucha or Irpin where Ukrainians have been resisting the Russian attempt to encircle the city for days.

They are mothers themselves, as much as they also would like to be close to their own family and children, they are too scared to commute and risk not being able to come to work anymore.

In some cases, their children are not even home anymore as they are now on the frontlines.

The 30-year-old and 22-year-old sons of nurse Lyudmila Yashchenko are now fighting to protect their country.

Exhausted by the many days of uninterrupted work, she said she is only able to get a few hours of sleep, and even less fresh air as she doesn't dare venture outside for too long.

The occasional sound of artillery could be heard coming from not too far away by an AP reporter visiting the nursery.

Yashchenko would not reveal figures on how many parents have so far come to collect their child, or how many babies are waiting, or how many more mothers are expected to deliver soon.

She and her colleagues said a paediatrician comes to check on the health of the babies, that there is enough food and everything the babies need and everything is done to provide a quiet and peaceful environment to protect these fragile new lives.

All they can do is hope this won't last for too long.

They hope and wait for parents to come, just as they wait for other pregnant surrogate mothers to deliver, and for the war to end soon.