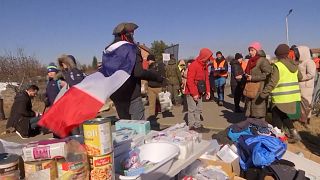 Dozens of volunteers from around the world have travelled to the small Polish town of Medyka at the border with Ukraine to help refugees, mostly women and children who are fleeing the violence.

Dozens of volunteers from around the world have travelled to the small Polish town of Medyka at the border with Ukraine to help refugees, mostly women and children who are fleeing the violence.

Some are also there to help the pets and animals who arrive with their owners or are being evacuated.

The road that leads from the Ukrainian border to the small village of Medyka is packed with volunteers making hot food and drinks, offering first aid and treatment.

Some offer sweets and candies and entertainment for children.

David Fox Pitt from Siobhan trust charity said that they are here to help Ukrainian refugees but also the Polish people who have faced a large influx of refugees since the Russian invasion of Ukraine started.

Among them was Balwant Signh from United Sikhs organization in Seattle, who has been cooking hot meals for refugees.

Lillan Boulard, a volunteer from France a few days ago left France with his friend to come to the Medyka border crossing and help parents with babies and children.

He is dressed up as the character Jack Sparrow and tries to put a smile on the face of children.

With Russia's invasion of Ukraine now in its third week, it forced about 2.5 million people to flee Ukraine as others try to seek refuge in basements, subway stations and underground shelters around the country.