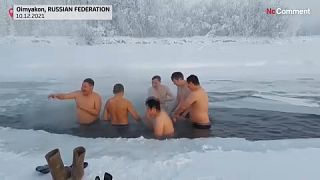 A group of men were seen taking a plunge in frigid waters in Oymyakon, a village in far northeastern Russia believed to be one of the coldest inhabited settlement on Earth.

Swimmers went for their icy dip as temperatures in the Sakha Republic hit -61.1 C on Wednesday, December 9, one of the lowest ever recorded in the country and the lowest temperature recorded in Russia since 1984.

Temperature difference across Russia also nearly broke a world record this week, with a 85.6 C contrast recorded on Wednesday, according to the Climate Reanalyzer website.