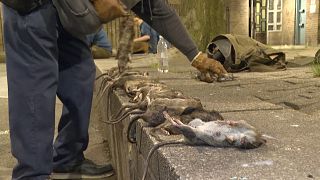 The dogs, mostly terriers, pant and strain at their leashes before diving into trash bags and emerging seconds later with a convulsing rodent between their teeth.

New York's furry rodents are notorious. Legend has it there are as many rats in the city as humans (some eight million), with public-health officials regularly testing new techniques to control the population, including placing dry ice in rat burrows to asphyxiate them.

That hasn't deterred the men and women volunteers of R.A.T.S. (Ryders Alley Trencher-fed Society) and their dogs. They have been chasing vermin for about 30 years and have maintained their nocturnal meets during the pandemic, albeit slightly less regularly.