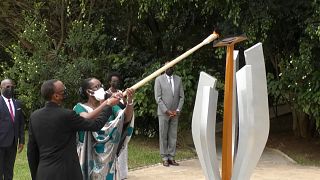 Rwanda's President Paul Kagame on Wednesday commemorated the 1994 genocide against the Tutsi, during a solemn ceremony in Kigali.

Twenty-seven years ago, Rwanda descended into violence in which some 800,000 Tutsis and moderate Hutus were massacred by the majority Hutu population over a 100-day period in what was the worst genocide in recent history.