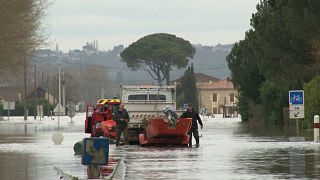 Flooding in France's south-west after region hit by Storm Justine

This was one of France's major rivers, the Garonne, after the southwestern region was hit by Storm Justine.

The river is still critically high at Marmande, which is situated between the cities of Bordeaux and Toulouse.

Nearby town Meilhan-sur-Garonne was left underwater following the storm. In the wider region, Lot-et-Garonne, scores of people had to be evacuated.