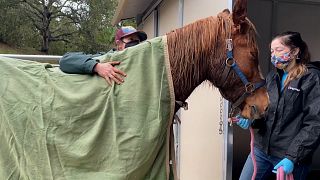 A horse and pony in Northern California are safe after being stuck in the mud for up to 18 hours, according to a statement from SPCA Monterey County.

The mare and pony got trapped in the mud late Wednesday night in Salinas after the area experienced a debris flow during recent severe storms.

After mudflow broke down their fence, the animals apparently wandered out of their enclosure and got stuck.

When the owners discovered the animals on Thursday morning, they were submerged in chest-deep mud, unable to move.

Rescuers from several Bay Area fire departments, already in the area to help with storm damage, worked for hours to rescue the animals using a front loader. They were also joined by neighbours with shovels and other tools to help.