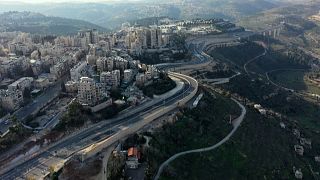 Streets in Jerusalem were almost completely empty on Sunday as Israel's third national lockdown to curb the spread of the coronavirus pandemic took effect.

Israel has seen a recent surge in coronavirus cases despite unleashing one of the world's fastest vaccination campaigns.

The country has given the first of two vaccine doses to nearly 20 per cent of its population. Prime minister Benjamin Netanyahu said on Thursday that it has secured enough vaccines to inoculate the whole adult population by the end of March.

Israel is heading to its fourth national election in two years in March. In the meantime, Netanyahu has called on Israelis to make "one last big effort" to halt transmission by adhering to the tightened restrictions.

Most schools and businesses were closed starting on Friday, with people required to remain within a kilometre from home except for essential needs. Public gatherings are heavily restricted and public transportation is limited.

The restrictions are to last for at least two weeks.

Thousands of police will be deployed to enforce them, with roadblocks set up on major thoroughfares.