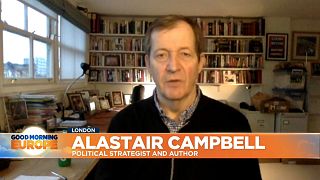 The UK government has sent out mixed messages to citizens when it comes to the coronavirus pandemic, according to political strategist and author Alastair Campbell.

A former director of communications for ex-prime minister Tony Blair, he said populism - worrying less "about the facts than the impression you're trying to create amongst the public" - is to blame for the inconsistency.

He pointed out the government's U-turn when it comes to sending children back to school after the Christmas holidays - Prime Minister Boris Johnson yesterday announced all schools in England would be closed from Tuesday as part of a third nationwide lockdown.

Most primary schools were expected to open on Monday while secondary schools were set to reopen on a staggered basis, but the government faced pressure to keep children out of classrooms amid surging COVID-19 cases.

He said the UK government used "being led by the science" as a way to justify "doing very difficult things at the start" but this later created a "conflict between a fact-based approach from the scientific community and populism".

Populism is "infecting" parts of Europe, "notably in the UK, Hungary and Poland", he added.

For Campbell, the countries that have succeeded in combatting the coronavirus have had a two-pronged approach, which included basing their decisions on "understanding and appreciation and the importance of facts".

"The second is actually taking the public into their confidence – about the difficult decisions they are having to make and the difficult choices they are facing," he added.

Campbell thinks the UK has "failed very, very badly" on both of these points.

Watch Euronews's full interview with Alastair Campbell in the player above.