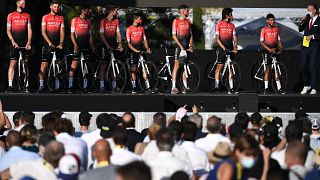 The sun had barely gone down on this year's postponed Tour de France cycling race when fresh allegations of drug use emerged.

Dominique Laurens said the probe had found drugs and "above all a method that can be qualified as doping" among personal belongings.

Two people have been taken into custody. The investigation only centres on a small part of the team.

France-based Arkéa-Samsic finished 12th in the overall team standings following the completion of the race on Sunday.

Emmanuel Hubert, the manager of the team, said it would support its riders but "if it turns out that at the end of the current investigation, elements come to confirm the veracity of doping practices, the team would immediately dissociate itself from such acts and take without delay measures which are necessary to put an end to the bonds which could unite them with unacceptable methods."