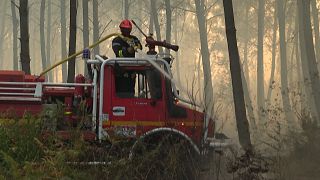 More than 180 firefighters have battled a forest blaze raging across nearly 250 hectares of pine trees in France's southwestern Gironde region. It is the largest fire in the area so far this year.

The fire, which started at 2 pm on Monday, was under control late in the evening, according to Nouvelle-Aquitaine prefecture.

"It does not progress any longer," said firefighters, who will remain on-site to ensure the fire does not restart.

The wind, sandy soil and young pines in the area made the wildfire "difficult" and "virulent", fire brigade captain Mathieu Jaumain pointed out.

The origin of the fire is unknown.

About 50 people had to be evacuated as a precaution in the late afternoon because of the dense smoke.

About a hundred fire engines were mobilised.

The south-western Gironde region has had a particularly dry and warm summer so far and other heatwaves are expected in the weeks to come.