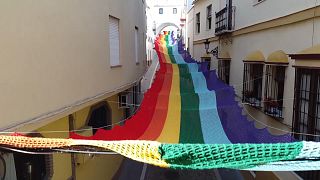 A long rainbow flag flutters over a street in the centre of Aguilar de la Frontera, in southern Spain's province of Cordoba.

It celebrates those who identify as LGBTI (lesbian, gay, bisexual, transsexual and intersex) and it was created by a group of 14 local women.

It was the brainchild of town councillor Carmen Surera Maestre, who looks after Equality and Women issues in Aguilar de la Frontera.

The crocheters that created it all suffer from fibromyalgia, a condition that causes increased sensitivity to pain, extreme tiredness and sleeping difficulty.

Normally they meet up to practice pilates, yoga and crochet, as movement helps ease their pain.

During the coronavirus pandemic lockdown, they have been confined to their homes.

That did not stop them to find a way to help their community, as Mari Cosano explains.

"During the lockdown, we volunteered to make medical masks and gowns. They said there was no material to make masks. We wanted to help and thought: 'What can we do?' Then Carmen had the idea and we all agreed. All of us who knew how to crochet signed up."

For those crocheters, the flag represents hope for all those who are suffering, and is also a way for telling people to be themselves.

Team member Manoli Prieto Muriana says the project helped them cope with the limitations of lockdown.

"What we wanted was to help and feel useful," she says, adding that being active made them "feel stronger and more excited".

The street's traditional white buildings are offset by the colourful creation, which stretches for 52 meters and is 2.5 meters wide.

The flag will remain throughout the summer to promote equal rights for the LGTBI community in rural areas, according to local officials.

Pride grew out of the Stonewall riots of 1969 which followed a police raid at the Stonewall Inn in Greenwich Village, New York City. The Stonewall was one of the many lesbian and gay bars in the area.

A year later, on 28 June 1970, the first Pride march was held to mark the event in New York City.

Afterwards, Pride events began to take place in June and July in towns and cities across the globe.