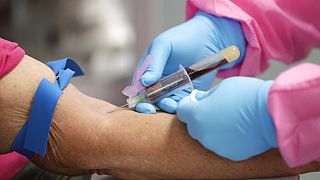 A Paris-based immunology expert has told Euronews he has doubts about the effectiveness of so-called COVID-19 immunity passports as a viable system.

The passport or certificates would be issued to those who have had the disease on the assumption they are therefore immune from catching it again.

UK health minister Matt Hancock said in April the government was looking at the possibility of issuing immunity certificates in a bid to get people back to work.

The certificates would be issued based on the results of a blood test that looks for antibodies produced when fighting the COVID-19 infection.

But Dr Arthur Clement, chief executive of Laboratoire Clement, told Euronews there were doubts surrounding the effectiveness of such tests.

“We’re not sure of the reliability or the accuracy of the test. There could be false negatives and false positives (among) the patients, which would lead to a misuse of the test, which we would want to avoid.

“Also, there are still some questions regarding the test. We are not very sure that a patient that has been infected is protected against (repeat) infection - and we’re not sure that the antibodies can prevent new contagions."

The viability or otherwise of a system of immunity passports has created controversy for weeks.

In early April, the UK government suggested that the documents could play a role in ending the lockdown.

The World Health Organization later cast doubt upon their usefulness because of the ongoing lack of evidence that those who had recovered from COVID-19 were immune to a second infection.

“It might create a perverse incentive for individuals to seek out the infection."

Dr Clement also warned against the potential stigmatisation or exclusion of a group of people.

“It is risky to impose an artificial restriction on people who cannot (then) participate in social, civic or economic activities," he said.

“It might create a perverse incentive for individuals to seek out the infection - and we don’t want that either.”