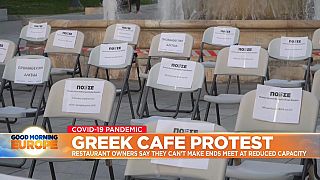 Greek restauranteurs served up an unusual protest - lining up hundreds of empty chairs in a central Athens square.

It was to show their opposition to government plans for social distancing when eateries are allowed to reopen next month.

Restaurants will have to keep tables a certain distance apart to prevent the resurgence of COVID-19 in the country.

This means, it's claimed, that restaurants will only be able to operate at 35 per cent capacity when they reopen.

“This is what we will face in the near future if the government does not support our union," said George Kavathas, president of Greece’s Federation of Restaurant & Related Professions, referring to the square's empty seats.

"We have no future if we open under strict restrictions. We need more tables and more capacity in order to work properly.”

Restaurant and cafe owners are asking for immediate financial aid from the government to try to save tens of thousands of threatened jobs in the sector.

In Thessaloniki, where a similar protest was also held, restaurant owners have said they need concrete action, not just words of sympathy.

Ioannis Filokostas, president of the Thessaloniki's association of restaurant owners, called for months of government aid.

“VAT tax should be less than 10%, especially on alcohol," he said.

"We also ask for a rent subsidy for the period that we were closed and a 50 per cent rent subsidy until the end of this year.”