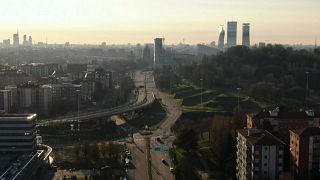 Europe stands united in the face of the coronavirus outbreak. That's the pledge from Brussels -- where leaders unveiled a raft of emergency measures on Tuesday to shore up health care systems and help the bloc's economy.

The European Union has close to 15,000 confirmed infections and more than 530 deaths - with all 27 member states affected.

Speaking after a video-conference with EU leaders, Council President Charles Michel told reporters "Our citizens' health is the first priority". But economic concerns aren't far behind: Commission President Ursula von der Leyen announced a €25 billion coronavirus investment fund for the health care sector, labour market and SMEs. The first €7.5bn will be released from the current EU budget - with the rest to be distributed later.

German Chancellor Angela Merkel said that European nations needed to cooperate in the fight against COVID-19 as Slovenia and Austria closed their borders with Italy as the virus spread.

Merkel said that she had talked to other EU leaders and the European Commission via video link and explained what her country is doing to contain the spread and financially supporting companies that have been hit by the outbreak.

In a written statement, she said that the other leaders also stressed that European cooperation in the battle against the coronavirus was much needed.

The coronavirus outbreak has now struck at the heart of European politics, with the EU parliament becoming a ghost town and EU leaders reduced to holding the virtual summit.

During their video meeting, which was attended by European Central Bank President Christine Lagarde and European Commission President Ursula von der Leyen, the leaders discussed how to coordinate their response to the virus and its economic consequences.

They pledged to accelerate research into the disease and to support the sectors the hardest hit, such as aviation.

Watch Shona Murray's report in the player above