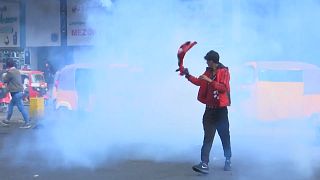 Several tear gas canisters were seen and gunshots were heard during the clashes near al-Khilani Square.

The protesters are clashing on a daily basis with security forces in the area, which is close to Tahrir Square.

At least 500 protesters have died since the demonstrations began.

Mass anti-government protests erupted on October 1 last year, when thousands of Iraqis took to the streets in Baghdad and the predominately Shiite provinces in southern Iraq to decry rampant government corruption, poor services and lack of employment.