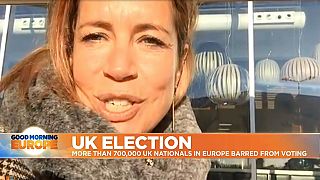 Carrie Frais, a British expat has been resident in Barcelona since 2003 and won't be able to vote on Thursday:

"I'm extremely frustrated. I moved to Spain in 2003 and last year I lost my right to vote in the UK, but unless I renege my British passport and become a Spanish national, I can't vote in Spanish elections either, other than local ones.

"I think it's extremely unfair. I had my chance in the 2016 Brexit referendum, but a lot of people here didn't have that chance because they weren't aware of the importance of it - or in some cases they sent a postal vote and it arrived late.

"A lot of my British friends living out in Spain here feel frustrated they weren't able to affect the outcome of the 2016 referendum vote."

Watch the interview on Good Morning Europe in the video player above.

READ MORE: More than 700 thousand UK nationals living in Europe will not be able to vote in the UK’s general election.