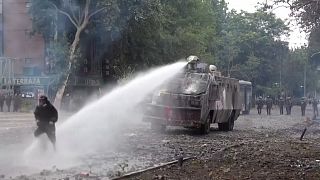 Demonstrators clashed violently with security force vehicles in Santiago on Thursday, November 21, as the demonstrations that shook Chile moved into their second month.

Throwing stones and pointing lasers at vehicles, demonstrators found water cannons and tear gas from Chilean security forces on a street in the capital that looked like a battlefield.

The protests that began during a walk at subway fares have sometimes been triggered by violent riots, looting and arson.

The government of Chilean President Sebastián Piñera promised a series of reforms to quell the demands of protesters, from raising the minimum wage to completing pensions.