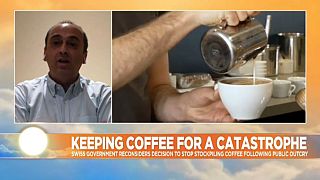 What can't you live without? Switzerland rethinks coffee stockpile

Switzerland has long held a 15,000-tonne strategic coffee bean reserve to help prevent supply disruptions for the land-locked country. Coffee has historically been one of several staples on Switzerland's "essential to life" list - which requires producers by law to store a certain amount of goods in case of a national emergency.

But the maintenance of those reserves has recently been questioned by lawmakers, with some arguing coffee beans aren't critical to life in an emergency. But many across Swiss society disagree, and have pushed back against plans to scrap the stockpile.

"Since the time of war, we really consider coffee as being essential to the moral wellbeing and the positive thinking of our people," says Chahan Yeretzian, the head scientist at Zurich's Coffee Excellence Centre.

Yeretzian argues the health benefits of coffee are being overlooked.

"It is nutritionally valuable for various reasons. First of all, coffee has no calories and often replaces calorie-rich beverages. Coffee has a lot of antioxidants and other health benefits," he says.

"I believe that coffee is an integral part of our culture. Switzerland is a country that consumes a lot of coffee. We really believe that in case of a crisis, coffee will keep up the morale of the troops as well as the population."

A spokesperson for Switzerland’s Federal Office of National Economic Supply explained to Euronews why the idea to end the stockpile was put forward;

As for how this will be resolved:

“The government is now analysing all the responses to the consultation and will likely make the final decision sometime next year,” the spokesperson added.