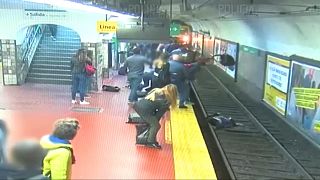 Commuters help save woman who fell onto train tracks in Argentina

Commuters on a crowded subway platform in Buenos Aires came to the rescue of a woman who fell directly onto the tracks of an oncoming subway train on Tuesday (October 15).

Security camera footage shows a man fainting at a station and inadvertently pushing a woman off the platform.

Thanks to the rapid reaction of the other commuters, waving to halt train, the train manages to slow down in time.

The crowd of bystanders can be seen frantically waving their hands and bags to draw the attention of the subway car driver and halt the train.