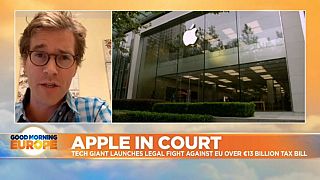 Apple bites back: Tech giant takes on the Europe Union over tax bill

Tech giant Apple is launching a legal challenge against a European Commission order to pay 13 billion euros in back taxes.

The iPhone maker is expected to send a six-man delegation headed by Chief Financial Officer Luca Maestri to the two-day court hearing at the Luxembourg-based General Court, the EU's second-highest court.

In August 2016, the Commission said tax rulings by Ireland in 1991 and in 2007 had artificially reduced Apple's tax burden for over two decades, effectively making it illegal state aid.

European Competition Commissioner Margrethe Vestager pointed to a 0.005% tax rate paid by Apple's main Irish unit in 2014 as an example of the unusually low payments by the company.

Apple is expected to argue that it did nothing wrong as it had followed Irish and U.S. tax laws.

Apple will tell the court that the bulk of its taxes are owed to the United States because the majority of the value in its products including design, engineering and development, is created there.

"The European Commission is claiming Apple was paying a percentage of taxes of profits well below one percent. Apple maintains it was paying the 12.5 percent corporate rate," he said.

A win-win for Ireland

Ireland, which has accused the Commission of exceeding its powers and interfering with the EU member's national sovereignty over tax affairs, is also challenging the EU ruling.

The Irish tax regime is a key attraction for multinational companies, which employ around 10% of the country's workforce.

"The ruling is sort of ironic for Ireland. It's not actually asking for back taxes from Apple, but should the European Commission win and Ireland lose, then Ireland would gain 14 billion or so euros from Apple as back taxes."

Lawmakers will be watching across the Atlantic

"Washington has accused Europe of anti-American bias. I think that has only extended with the Trump administration. Europe does have this issue where they don't have very many tech giants themselves," Mr McGee said.

"The biggest tech company is SAP with a market capital of $160 billion dollars. That really doesn't even get into the tier of US companies. Washington sort of views Europe as having a certain inferiority complex and they're trying to get profits back from these tech giants through legal means that they don't consider all that valid."