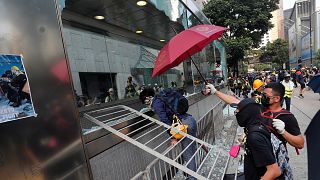 Thousands of demonstrators in Hong Kong took to the streets on Sunday, continuing their demands for more democratic freedoms in the semi-autonomous Chinese territory.

Flash mobs were seen pushing a trolley loaded with bricks and cardboard sheets were lit ablaze. Another fire also broke out, before firefighters rushed to the scene to put it out.

Police fired tear gas at protesters who occupied the roads in another weekend of anti-government demonstrations in Hong Kong, which left several people injured