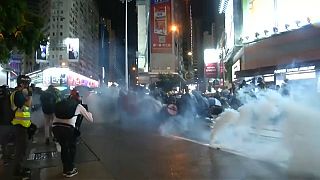 Riot police move in on protests in Hong Kong

Riot police marched towards the Admiralty district in Hong Kong on Saturday (August 31) evening, followed by 20 police cars, where protesters had thrown petrol bombs from flyovers, some landing close to police.

In the Wanchai bar and restaurant district, police fought running battles with protesters, beating them with truncheons.

Protesters also threw paving stones at police who arrested several of them.

The protests came on the fifth anniversary of a decision by China to curtail democratic reforms and rule out universal suffrage in Hong Kong, a former British colony that was returned to China in 1997.