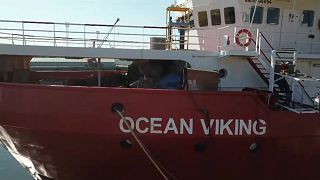 There are 356 people on board the charity vessel Ocean Viking which is stranded in the Mediterranean Sea.

Conditions on the vessel are reported to be deteriorating quickly after 12 days of the migrants being rescued from the open sea.

Médecins Sans Frontières says of the 103 children under the age of 18 now on board, only 11 of them are accompanied by a parent or guardian.

"When the rescued people came on board, they were completely exhausted. They have spent many hours at sea, with no sleep, no water, and no food. Immediately after embarkation, patients typically present dehydration, general physical weakness, dizziness, hypo-or hyperthermia, and burns – mainly caused by fuel or the sun – or with newly sustained injuries associated with the crossing itself," MSF said on their website.

Frédéric Penard is Director of Operations at SOS Mediterranee - the charity responsible for the Ocean Viking rescue boat along with MSF. He spoke to our Good Morning Europe programme about the conditions on board the boat:

“They have been drifting at sea for days, we need to disembark them straight away so we can provide them with the necessary care. There is a lot of despair as not knowing is something strong on them – we recover these people from the middle of the high seas… this cannot carry on for very long.”

He also noted: “We respect the maritime conventions which say it is not up to the captain to decide where the migrants should be disembarked… it is the duty of the captains to recover people from the sea, but the coordination after that is the responsibility of the states who signed up to the maritime convention. They have to find a place of safety.”

Penard went on to say that this should be done "as quick, as fast, as close as possible to relieve the captain and to relieve the people on board. An international, EU-wide solution should be found between European states, France and Germany included.”

“After 12 days this solution should be found because we are not able to manage this situation for very long.”

Watch Good Morning Europe’s report on the latest migrant boat stranded in the Mediterranean Sea in the player above.