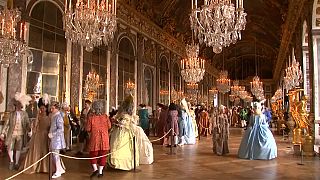 Costumed guests go back centuries at Palace of Versailles

More than 600 guests had the chance to live out their royal fantasies for one-night-only at the Palace of Versailles on Monday (May 27), with a costumed party designed to take them back hundreds of years to the time when France was ruled by kings and queens.

This year's theme was "Marie-Antoinette and fashion," given the iconic queen's worldwide fame as one of France's most controversial and fashionable historical figures, having served as the last Queen of France before the French Revolution and ultimately being executed for high treason in 1793.

The Palace and gardens of Versailles, which served as a royal residence from 1682 to 1789, are one of France's most popular tourist destinations, with around 8 million people visiting each year.