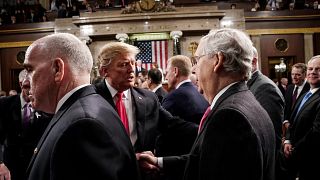 US President Donald Trump’s promise to call a national emergency in order to fund a wall on the Mexican border is provoking opposition from those who consider it to be an abuse of his constitutional powers.

Trump is set to agree a Congress bill on the federal budget, but then wants to use emergency powers to fund his electoral promise. Those powers were introduced in 1976, primarily to manage military emergencies

Watch the video in the player above