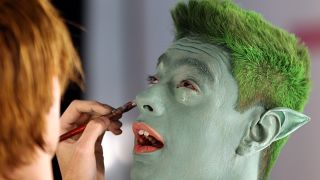 Fans met with artists during the four-day CCXP event, held since 2014, including stars from HBO's hit series 'Game of Thrones.'

Brazilian student Julie Venancio, who came dressed as an anime version of "Jack the Ripper," said:

"I think it is (Cosplay) a very rich culture and it's worth you invest yourself in it," she says. "It's a very cool universe."

The Comic Con is considered one of the largest in the world and drew 227,000 visitors last year, the Brazilian government said.