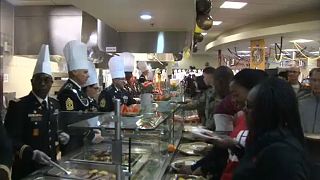 US troops celebrated the Thanksgiving holiday with a Harry Potter-themed feast on Thursday at an army base in South Korea.

Roast turkey, mashed potatoes and stuffing were served to hundreds of soldiers at Camp Humphreys in Pyeongtaek, which lies about 100 kilometres from the border with reclusive North Korea.

At the dining facility decorated with Harry Potter flags, US soldiers said this celebration helps them to deal with homesickness.

The US currently has around 28,500 troops stationed in South Korea.

North Korea has long demanded their removal as one of the conditions for giving up its nuclear and missile programs.