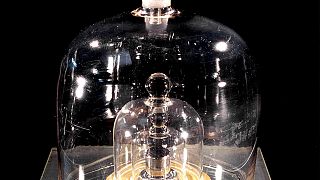 Scientists from around 60 countries voted on Friday to change the way the kilogram is defined, marking a historic overhaul to the international system of measurements.

For over a century, a lump of metal kept in a vault near Paris has served as the benchmark definition of the kilogram, the touchstone by which all other kilograms are weighed. But that dusty old lump is now being forcibly retired.

The change was made at a meeting in Versailles, France, with experts opting for a more modern, and accurate, alternative.

“The vote is a unanimous yes, I hope that such votes will be possible for many other issues in the world,” said Professor Sebastien Candel, president of the French Academy of Sciences.

A piece of platinum-iridium, locked inside a vault in France, was until now used to define the kilogram.

It has been there since 1889 and all modern mass measurements came from that object.

The biggest problem with the relic is that, despite the fact that it's the mother of all measurement, it doesn't always weigh the same.

"We live in a modern world. There are pollutants in the atmosphere that can stick to the mass," said Ian Robinson, a specialist in the engineering, materials and electrical science department at Britain's National Physical Laboratory.

"So when you just get it out of the vault, it's slightly dirty. But the whole process of cleaning or handling or using the mass can change its mass. So it's not the best way, perhaps, of defining mass."

And taking it out to clean it also introduces the problem of slippery fingers.

"You can damage it without noticing it," said Florian Beaudoux with the French National Metrology Laboratory— one of the few people who does handle it.

"So our reference can move without us knowing it and then if we drop it, it is very serious because we lose the unit of the kilogram in France."

An "electronic kilogram" is the new baseline measure of mass.

The kilogram will now be defined by a tiny but immutable fundamental value called the “Planck constant”.

An apparatus called the Kibble balance makes use of the constant to measure the mass of an object using a precisely measured electromagnetic force.

It's not the first measurement to see a change — the second and the metre have also been redefined over the years.

Experts say the new system should be simpler to calculate, easier to use and more accurate.

But if you're hoping it might change in your favour by shaving a few kilos off your weight, or help you save a few cents at the vegetable market, you're out of luck. Largely, only metrologists will be able to tell the difference between the old kilogram and the new.