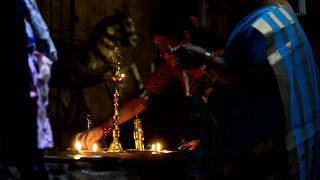 Former Sri Lankan president Mahinda Rajapaksa rallied tens of thousands of supporters in a show of strength Monday even as the parliament's speaker refused to recognise his controversial appointment as prime minister.

Busloads of men and women from around the country descended on the capital as Rajapaksa thanked President Maithripala Sirisena for sacking Ranil Wickremesinghe and appointing him in his place.

The move on October 26 triggered an unprecedented constitutional crisis, plunging the island into political turmoil.