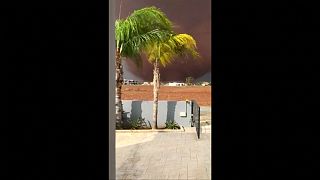 Local media said that several houses were badly damaged, but no injuries have been reported so far.