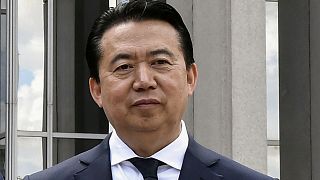 Former INTERPOL head under investigation for bribery in China

Here today, gone tomorrow- there's no guarantee you'll get to where you're going in China. Chinese authorities have finally announced that they are investigating the missing head of INTERPOL, Meng Hongwei for taking bribes. He flew from Lyon, France to China last Friday and subsequently stopped communicating with family and friends — his last text to his wife was sent shortly after he arrived, and read, "Wait for my call." It was followed by a knife emoticon, which Grace Meng says she takes to mean her husband was in danger. She had reported her husband missing, and INTERPOL had been pushing China for an explanation as to the whereabouts of its President.

"The investigation against Meng Hongwei's taking bribes and suspected violations of law is very timely, absolutely correct and rather wise," the Chinese Ministry of Public Security said in a statement.

Meng sent in his resignation to INTERPOL yesterday, effective immediately. The Senior-Vice President Mr Kim Jong Yang of South Korea, will take his place until next month when an election will be held to replace him for the rest of his two-year term.

Meng's wife Grace held a press conference from Lyon, France on Sunday. She spoke softly in Mandarin and at times broke down in tears.

"From now on, I have gone from sorrow and fear to the pursuit of truth, justice and responsibility toward history," she told journalists.

"For the husband whom I deeply love, for my young children, for the people of my motherland, for all the wives and children's husbands and fathers to no longer disappear. Even though I can't see my husband, our spirits are always connected, I believe he will support what I'm doing. This issue is about fairness and justice, it is about the international society and about my motherland and its people whom I love."

She delivered her statement with her back to the cameras and asked not to be identified on screen for fear of her safety and that of her two young children.

Meng Hongwei is not the only prominent Chinese figure to go missing lately. World famous actress Fan Bingbing also mysteriously disappeared for three months, re-emerging last week with a public statement that she had failed to pay her taxes properly — and a deep apology. She has been fined 248 million yuan.