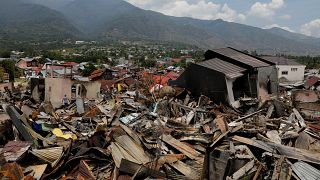 Emergency teams say they are finding entire villages wiped off the map after the earthquake and tsunami that struck Indonesia last week.

Indonesian Red Cross disaster responders have reached Petobo yesterday - only to find that the village – which was home to almost 500 people – no longer existed.

“It has been literally wiped off, there’s a village somewhere there but now on top of it is five meters of mud,” said Tony Cheng, a freelance journalist who was in Petobo yesterday.

Cheng added that rescuers are still hopeful of finding survivors as they have heard sounds in reaction to calls.

More than 1,400 people have been killed in the earthquake and subsequent tsunami that hit the island of Sulawesi last week.

Indonesian authorities have said the chances of finding survivors "will dwindle to almost zero" by Friday.

International aid has been slow to reach survivors because of the destruction of roads and bridges across the affected areas.

“We just managed to get the first team there, but it’s been very tricky, we kept getting on flights and then they were cancelled or they weren’t going actually to Palu in the end,” said Ginny Haythornthwaite from the NGO ACTED.