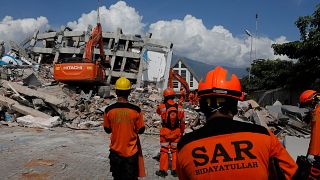 Cities on the island of Sulawesi in Indonesia are in a chaotic state after the latest devastating quake to hit the country, this one followed by a six metre tsunami that hit the town of Palu. The official death toll rose to 1 234 Tuesday morning and is expected to rise even further, as machinery and communications begin to reach more remote areas. Four days on from the disaster, it's now about emerging from shock and limping towards recovery - but of course that process comes with its own problems.

Reports of looting are rampant as food supplies dwindle. Most stores and markets are closed and resupply is difficult as the airport in Palu is damaged and roads have been literally ripped apart. Freshwater infrastructure has also been damaged, and the hundreds of bodies mean the threat of disease is in the air - though mass graves are being dug to combat that possibility. Communications are also down in many areas, meaning reporting casualties is difficult and daily life is even more so.

"Getting food is really a main concern of the people right now," said Indonesia country director for Action Against Hunger Yohanis Pakereng. "Because all shops in affected areas, in Palu, in Donggala- all are closed right now. So it's difficult for people to get food- all the food is provided either by the army, or by other people. There's potential of course for anyone there to be looted. Several days ago the government already instructed those markets and shops to be open in order for people to be able to get food, and later on they will be compensated for that. But you know the problem just escalates - the shops are closed, people break in."

Stories of dramatic rescues and horrific findings are also starting to emerge. A woman was pulled still alive from a collapsed hotel in Palu and taken to hospital to recover, while 34 schoolchildren were found dead in a church that had been hit by a landslide.

There are also thousands of people displaced and living in makeshift camps.

"And then people are staying outside of their houses, their houses have been destroyed so there's need for temporary shelters for them and public services for them so they can have food to eat, and proper sanitary facilities at these displaced persons sites," said Pakereng.

The UN has estimated that over 50 000 people have been displaced and are living in camps or temporary shelters - some have no homes to go back to, and some are too scared to return to a roofed residence as powerful aftershocks continue. Another earthquake, this one a smaller 5.9 magnitude hit Tuesday morning off the Indonesian island of Flores. Indonesia is located on the Ring of Fire, an area of high seismic activity that borders the Pacific Ocean, meaning earthquakes are common and there's no telling when the next one will hit - just two months ago a major one hit near the city of Lombok, and killed hundreds.