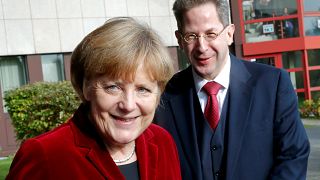 Merkel fires top spy chief and then gives him 'promotion'

The chief of Germany’s Intelligence Agency (Bundesamt für Verfassungsschutz) - Hans Georg Maaßen - has been removed from his job over comments he made on the Chemnitz riots. Maaßen has, somewhat controversially, been given another job in Germany’s Interior Ministry.

In an article published by Germany’s tabloid BILD, Maaßen had questioned reports that far-right extremists were randomly attacking migrants. He told the newspaper that his BfV intelligence agency had no credible evidence that so-called “hunts” of migrants took place.

In September, Germany saw a week of protests in the eastern city of Chemnitz after a man was allegedly killed by a migrant.

He will leave the federal spy service and become Deputy Head of the interior ministry. Opponents of Chancellor Angela Merkel have labelled this as a promotion. Chief of the Green Party, Anton Hofreiter told media that "Nobody benefits from this decision at all, except Mr Maaßen, who earns 30,000 Euros more. I believe that after this day there will only be losers in the Union and the SPD".

Chancellor Merkel has been facing sharp critique of her migration policy from all angles including from that of Horst Seehofer, the leader of Merkel’s CDU Bavarian sister party the CSU as well as Hans-Georg Maaßen himself. Interestingly, in his new position, Maaßen will now be working alongside Seehofer in carving migration policy.

The decision to move Maaßen to the Interior Ministry was a joint decision by coalition partners yesterday Merkel’s CDU and the SDP. Christian Lindner of the Free Democratic Party (FDP) says "What is happening now is a fake solution that only exposes one thing: this coalition has no line and is incapable of consistent action."