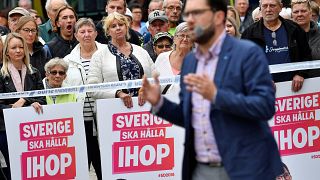 Swedes are getting ready to cast their votes in this weekend's general election, and far-right parties are expected to make historic gains in what should be a close contest. If polls are correct, no party will win a majority– but months of campaigning focused largely on immigration issues have already signalled a shift in the country's social politics.

The upstart far-right party Sweden Democrats are set to make large gains for the second consecutive election, their campaign focused on migration and public safety. The party isn't in a position to take down the center-left bloc that includes the ruling Social Democrats, or the four-party center-right opposition, but it could be in a position to give either group a majority.

Coalition governments are the norm in Swedish politics, and all eyes will likely be fixed on the party that ends up as kingmaker.

"This is the second or third largest party in Sweden right now, but none of the other parties want to work with them, which means we have a bit of a standoff in Swedish politics right now," Aftonbladet journalist Karin Moberg Granstrotold Good Morning Europe. "There's a lot of discontent with politicians in Sweden and in Europe, which gains voters for parties that promise quick solutions to difficult problems. The Sweden Democrats have gained voters by playing on that discontent."

The leader of the Sweden Democrats, Jimmie Åkesson, is only 39 years old. But an even younger generation of the party is already knocking on the doors of parliament. 22-year old Tobias Andersson is the leader of the party's youth wing, and he's aiming to become one of the youngest Swedish MPs ever.

"We have an issue right now with high amounts of sexual assaults and rapes and so on," Andersson told Euronews. "Safety is obviously the biggest issue this country is facing. To a far extent that has been going on as a consequence of the migration problems we've had."

There is no definitive proof that immigration and crime in Sweden are linked. Although the country has experienced a light increase in general crime, Sweden remains relatively safe compared to other European countries.

The Sweden Democrats remain unconcerned about a lack of allies in Parliament according to Andersson.

"I'm quite sure that the other parties will do their best to put us out of government and make sure that we're not a part of it," said Andersson. "But we've been the only real oppostion for four years and that has really been good for us as a party."

Sweden's larger parties have vowed not to work with the Sweden Democrats, in large part because of their dubious history. The party's origins lie in the world of Swedish facism, and it was primarily a white nationalist movement in the early 1990s.

For many Swedes, and migrants in particular, the party's recent success is a cause for concern. But that doesn't mean they plan on going anywhere.

"I would love to stay in Sweden," said Hussam al-Homsi, a Syrian refugee who is now a consultant with Deloitte in Stockholm. "We are getting to the election right now and who knows what is going to happen. I have good friends and networks with a normal life here, a nice life. I would like to continue to stay."