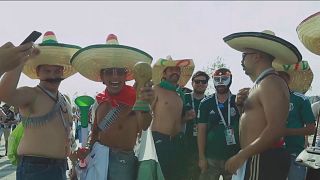 Colourful and whacky fan costumes are a staple of the World Cup, particularly in the excitement of the group stage on June 23.

There was a party atmosphere among Swedes in Sochi ahead of their team's match against Germany (in which Germany would snatch a late victory).

Mexico's fans were among the most colourfully dressed of the tournament, and their eye-catching costumes were on full display ahead of their team's match against South Korea in Rostov.

A group of Serbian fans came up with a "super" way to spur on their team at the World Cup. The "Super Serbs" — dressed in Superman, Spider-Man, Batman and Hulk costumes mixed with national symbols — have also been donning the same outfits since the 2006 World Cup.