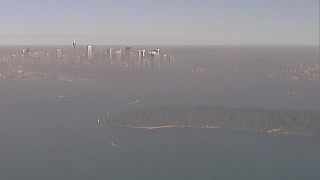 But the smoke engulfed the city's skyline and landmarks, and authorities urged residents with respiratory conditions to remain indoors, according to local media.

The levels of air quality for the city's northwest were rated as "hazardous" while the entire city was rated as "very poor," local media reported.

The haze is not expected to fully clear until Wednesday, officials said.