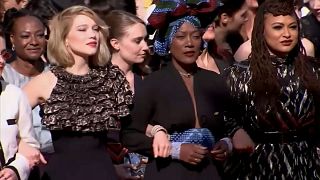 Eighty-two women climbed the steps of the Palais des Festivals at the Cannes Film Festival on Saturday in an unprecedented red carpet protest to press for improved gender equality in the film industry.

The number of stars, filmmakers and film industry professionals ascending the steps represented the number of female filmmakers who had been selected to compete at Cannes during the festival's seven-decade history.

In contrast to their 82, 1,866 films directed by men have been picked for the prestigious festival lineup.

Organisers said the event was orchestrated by the Time's Up movement and the French movement known as 5020x2020 to show "how hard it is still to climb the social and professional ladder" for women.