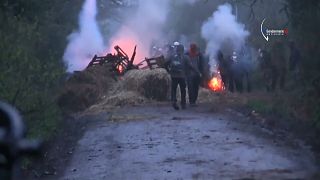 French police fired teargas and stun grenades and were pelted with stones during a dawn swoop on Monday to clear eco-activists and anarchists from a site in western France that had been planned as a new airport.

The site in Notre-Dame-des-Landes had been squatted for years by opponents of the plan to build a 580-million-euro ($710 million) airport which the government decided to drop in January.

Some 2,500 police took part in the evacuation which authorities said started at 6 a.m. (0400 GMT). Police had already blocked surrounding roads as early at 3:30 a.m., a Reuters journalist saw, while protesters set fire to barricades.

One police officer sustained an eye injury and a protester was arrested, said a police official who described the clashes as sporadic and relatively minor.

Ministers said the squatters had been ordered to leave after they had succeeded in getting the airport project halted. "We want to put an end to a lawless zone," the Interior Ministry said in a statement.