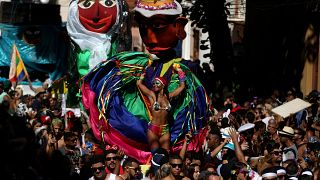 A few hours after the official opening of the Rio de Janeiro carnival the narrow streets of Santa Teresa (Saint Teresa) were taken over by the Carmelitas bloco.

Cariocas, as Rio de Janeiro residents are known, and tourists used to spend a lot on Carnival parade tickets and costumes.

But a grinding economic crisis in Latin America's largest nation and the rise of "blocos," as local street parties are known, are changing the nature of the big bash.

Much of the appeal of Rio's street parties is the variety of themes.

Any costume, or no costume at all, is fine, and revellers can choose according to their musical taste and location.

The street parties are free, or close to it, and partiers spend what they want on the food and drink being offered.

Hundreds of similar street parties will be happening in Rio de Janeiro between Friday and Tuesday.