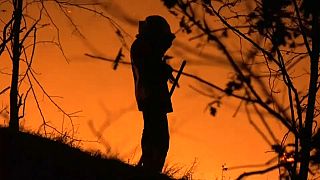 Updated: 23/10/2017
<p>Fifty people were moved from their homes on Monday (October 23) as a fire raged through the area of Val di Susa in northern Italy.</p> <p>They were seen leaving in vehicles in the early hours of the morning in the village of Bussoleno, where houses were threatened by the flames as fire-fighting teams battled to control them.</p> <p>Months of drought and a strong wind caused the fire to spread quickly. The fire brigade said hundreds of hectares had been destroyed.</p>
no comment