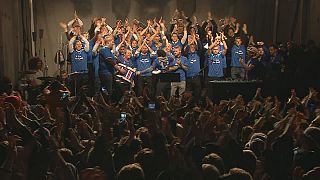 The Icelandic national football team celebrated with their fans in Reykjavik after qualifying for 2018 World Cup in Russia.

Iceland qualified for the World Cup for the first time after beating Kosovo 2-0 at home. Iceland is the smallest nation in terms of population, 330,000, to make the World Cup.

Gudni Th. Johannesson, the president of Iceland, said this is one of the biggest moments in Iceland´s sport history.