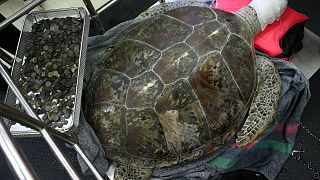 A 25-year-old sea turtle has undergone surgery in Thailand after swallowing 915 metal coins.

Omsin – which appropriately translates into piggy bank in Thai – had been finding it hard to swim under the weight.

The coins had been thrown into her pool at a conservation centre in Bangkok for good luck.

It’s believed the seven-hour-long operation was the world’s first such surgery.

There was no immediate estimate of the value of the coins, some of them foreign and many corroded.