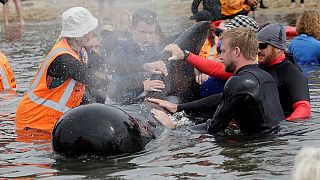 Researchers are hoping that one of the worst whale strandings ever witnessed in New Zealand is over, after more than 300 animals died.

As many as 700 pilot whales had become stranded on or near Farewell Spit on New Zealand’s South Island since Thursday. Volunteers working around the clock to refloat them were helped by a high tide on Sunday.