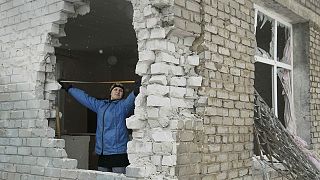 Heavy shelling has hit both government and rebel-controlled areas of eastern Ukraine, continuing an escalation of fighting this week. Central Donetsk came under heavy shelling overnight.

Several buildings, including a kindergarten were damaged, and large craters could be seen where shells hit.

At least 15 people have been reported killed in the fighting this week. More than 9,700 people have died in the war between government troops and rebels that began in April 2014.