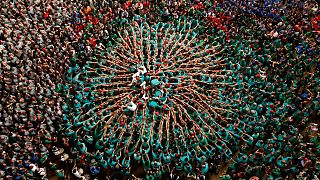 Updated: 03/10/2016
<p>The 26th annual Human Tower Competition took place in the city of Tarragona in the Spanish autonomous region of Catalonia.</p> <p>The tradition of building human towers or “castells” dates back to the 18th century and takes place during festivals in Catalonia, where “colles” (or teams) compete to build the tallest and most structurally-complex towers.</p> <p>The structure of the “castells” varies depending on their complexity. A “castell” is considered completely successful when it is loaded and unloaded without falling apart.</p>
no comment