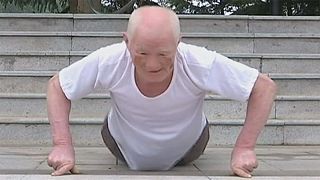 Fitness fanatic, 79, shows off his strength

A super-fit septuagenarian in China has been putting on a display of his strength and agility.

Zhang Zhuofum from Xuchang in the eastern part of the country, can perform two-finger push-ups, lifting his body weight using only his thumbs and index fingers.

“I’ve never seen it before. It’s astounding. He is 79 years old. I would never have believed it if I had not seen it with my own eyes,” said one impressed resident.