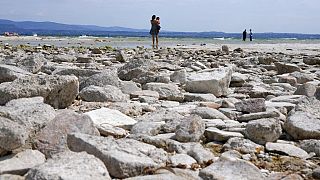 Tourists flocking to Italy's largest lake ahead of the country's long summer weekend have found a vastly different landscape than in past years.

Lake Garda in northern Italy has shrunk to nearly its lowest level ever recorded, revealing swathes of underwater rocks and warming the water to temperatures seen in the Caribbean.

“We came last year, we liked it, and we came back this year,” said tourist Beatrice Masi, as she sat on the sun-bleached rock, which now extended far beyond the normal shoreline.

“We found the landscape had changed a lot," she continued. "We were a bit shocked when we arrived because we had our usual walk around, and the water wasn’t there.”

Northern Italy is currently experiencing a historic drought linked to climate change, with a near absence of rainfall and snowmelt, besides soaring temperatures.

Vital rivers like the Po, running through Italy's agricultural and industrial heartland, have all but dried up in the extreme conditions, significantly denting food production.

Italy is not alone in Europe, which experts warn is suffering its worst drought in 500 years.

Many European countries, including Spain, Germany, Portugal, France, the Netherlands and the UK, are enduring unprecedented droughts this summer, hurting farmers and prompting authorities to adopt emergency measures.

The drought is predicted to worsen in Europe, potentially reaching 47 per cent of the continent.

Parched conditions in the Po, Italy's longest river, has already caused billions of euros in losses to farmers in the region, which produces 40 per cent of Italy's food.

Authorities have tried to compensate for the lack of rain by allowing more water from Lake Garda to flow into local rivers. However, last month they reduced the amount to protect the lake and the financially important tourism tied to it.

With 45 cubic meters of water per second being diverted to rivers, the lake on Friday was 32 centimetres above the water table, near the record lows in 2003 and 2007.

Garda Mayor Davide Bedinelli said he had to protect both farmers and the tourist industry, insisting that the summer tourist season was going better than expected.

Tourists, especially those from Germany, cancelled their trips to Italy in late July, during the country's latest heatwave.

“Drought is a fact that we have to deal with this year, but the tourist season is in no danger,” Bendinelli wrote in a 20 July Facebook post.

The lake was losing two centimetres of water a day, he confirmed.

Temperatures in Lake Garda are above average for August, according to seatemperature.org.

On Friday, the lake's waters were nearly 26°C around the same temperature as the Caribbean Sea's average of 27°C.

This is several degrees above average.

For Mario Treccani, who rents out beach chairs and umbrellas by the lake, the historically-low water levels are hitting his business, as fewer people are needing his chairs since there are now plenty of rocks on which to sunbathe.

“The lake is usually a metre or more than a metre higher,” he said, pointing to a small wall that usually blocks the water from the beach chairs

“It is a bit sad," he said. "Before, you could hear the noise of the waves breaking up here. Now, you don’t hear anything.”

'Unfathomable tragedy': Girls, 4 and 8, among a dozen killed by storms